You are at: Home 1X2 Gaming Aztec Secrets
back to all games
Aztec Secrets Slots Game
Game Details 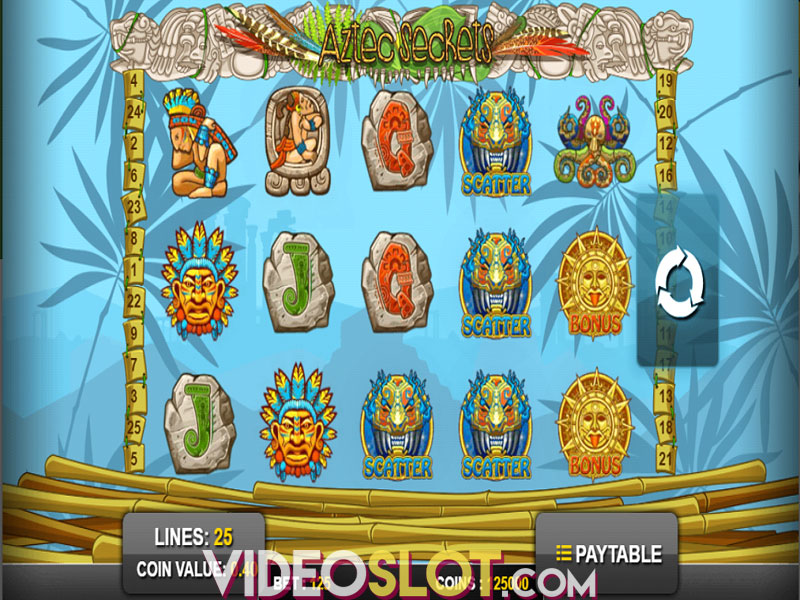 Rolled out by 1x2 Gaming, Aztec Secrets is a video slot based on the theme of ancient civilizations and their hidden treasures. Excellent visuals are backed up with a suspenseful, musical score which intensifies each time you land a win. The playing experience is furthermore enhanced with Wild Substitutions, Scatter Wins, a Bonus Round and a Free Spins Game that will help you increase your bankroll.

Aztec Secrets is a 5-reel, 3-row slot configured to 25 adjustable paylines that support bets from 1 to 125 coins. Enter the bet settings to choose the number of coins you wish to place per line, as the bet level goes from 1 to 5. The coin size ranges from $0.01 to $0.50 and once you’ve finished adjusting these values, you can start the game. Just press Spin and when the reels stop spinning icons should appear on adjacent positions from left to right on a payline in order to deliver payouts.

There is a score of colorful regular and special symbols occupying the reels. High-value icons represent a Warrior, a Woman and a Chief that deliver 600, 650 and 700 coins consequently when 5 matching icons appear on a winline. There are 2 medium-paying symbols, a two-headed Snake and an Octopus that pay out 500 and 550 coins respectively if 5 land on a winline. Low-win icons are represented with playing card symbols Jack through Ace, designed to resemble stone engravings and awarding from 350 to 450 for 5 of a kind. Wild is depicted with a golden monkey mask, landing on reels 2, 3 and 4, replacing all other symbols, except Scatter and Bonus icon, in completing wins. There are two more special symbols in Aztec Secrets which not only deliver significant prizes but also trigger bonus features. Scatter is represented with a totem mask and landing from 3 to 5 on a winline will grant you from 100 to 750 coins. The Bonus icon, represented with a golden Sun, will deliver 110, 340 and 800 coins respectively if 3, 4 or 5 land on a payline.

When a minimum of 3 Scatters appear anywhere on the reels, 10 Free Spins will be awarded. During this feature all winnings will be doubled which will significantly affect your budget. Another asset of Aztec Secrets is the Bonus Round, activated when 3 Bonus symbols appear in any position on the grid. A new screen will appear depicting a room covered with 5 rows, each containing 5 tiles which you are to uncover in order to reach the statue, along the way collecting cash prizes that will be paid out if you make it across the board.

Aztec Secrets offers a solid 95.50% RTP and special features that get triggered fairly often, providing a steady flow of payouts while at the same time delivering a simple, yet satisfying gameplay. As the game can be played on all devices, desktops, tablets and mobiles alike, try it out anytime and anywhere you wish.